admin May 31, 2018 Uncategorized No Comments

Executive Summary:
An International Servas Meeting took place in Nové Hamry (Czech Republic, Krušné Hory Region)
from May 11 till May 13, 2018. A total of nineteen members (including two children) from Servas
Germany, Servas Poland and Servas Czech Republic took part in a weekend focused on discovering
the beauty of the nature of the Krušné Hory Mountains as well as its rich past and cultural diversity.
The participants had sufficient time for discussions and getting to know each other. Future activities
were planned namely a cross-country skiing trip in the Krkonoše Mts. scheduled for March 2019. The
meeting was organized by Servas Czech Republic with support from Servas Germany. 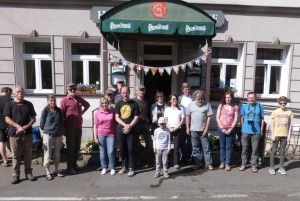 Friday, May 11, 2018
The first participants reached Hotel Seifert in the afternoon, some travelling as far as from the far
North, far West and far East of Germany as well as from Warsaw in Poland. The preferred means of
transport was car, however many of the participants used train and bus as the railroad to Nove Hamry
is currently under reconstruction. After accommodation and short familiarizing with the village of Nove
Hamry a dinner was served –delicious Czech meatloaf. Following was a round table discussion covering
such topics as introduction of the individual participants, describing their expectations from the
meeting and sharing their past Servas experiences. The plan for the following two days was outlined.

As a fairly strenuous hike was planned for Saturday it was recommended to all to get a good night’s
sleep.

Saturday, May 12, 2018
Shortly after 7 A.M. the participants interested in voluntary yoga practice met as the conference room
of the hotel for a half an hour practice to stretch our bodies and get into an even more positive spirit.
After a nutritional breakfast and obtaining snacks for the hike the whole group headed in the direction
of the Tisovsky Vrch (Peindlberg) Lookout Tower. The hike in part followed an educational trail where
we learned very interesting facts about the culture and history of the area as well as about the unique
natural phenomena. On the way we practiced our orientation skills in the wild and bravely handled a
vertical difference of several hundred of meters before reaching the lookout tower offering splendid
views of the Krusne Hory Mountains. The descent was even more demanding as the trail was extremely
steep, however all the participants managed extremely well and after more than four hours of hiking
reached our destination Nove Hamry.

After testing the hospitality of the nearby restaurant Malamut we settled for an a la carte lunch in the
restaurant Seifert. Following a short siesta the group headed to explore the National Natural Reserve
Rolava Moorland with its endemic flora and unique fauna. Bushwhacking through the thick pine
growth to the peat bog was an extremely challenging experience handled fantastically by all the
explorers. After admiring the unique landscape including photo shoots we continued to the nearby
deserted mine Rolava (Sauersack) and the surrounding remnants of the tin ore processing plant. Some
of use even gathered the courage to climb the dilapidated structure and inform the rest about their
discoveries. A sub-group most keen on hiking headed from here all the way back to Nove Hamry, the
rest continued further south the Rolava Lake, a watery pearl of the Krusne Hory populated by a
significant community of the extremely rare white-eyed pochards (Aythya nyroca). After observing the
beautiful scenery and getting enough of a well-deserved rest we headed back to our vehicles. We
stopped in the now deserted village of Jelení (Hirschenstand) once a prosperous miners and farmers
village. Especially moving was the monument to the destroyed empire church of St. Anthony of Padua
torn down in 1964. A wonderful time in the nature complemented by inspirational discussions was
nearing its conclusion as dinner was waiting for us back in the hotel.
This time we dined on a fine Czech gulash those preferring vegetarian enjoyed fried cheese with Tartar
sauce together with beer and other beverages. After dinner a ping-pong tournament followed and
then the Krkonose cross country winter trip 2019 was planned up to the last detail. A free program
followed, but as spending the whole day in the fresh mountain air took its toll, shortly after midnight
the last of us headed to their rooms.

Sunday, May 13, 2018
The day began with yet another yoga exercise followed by a breakfast and a nice little celebration of
the birthday of one of the participant. After settling the formalities with the hotel a photo shoot of all
the participants in front of the hotel followed and then we all hopped in our cars and drove some
eighteen kilometers through the lovely nature of the Krusne Hory to the picturesque resort of Bozi Dar.
Here we visited the birth place of Anthon Guenther a German poet and singer of the local folk songs
and had a chance to shop for some souvenirs. The day was again beautiful and sunny, the temperatures
at the higher elevation extremely pleasant. Then we descended down the steep slopes of the
mountains, to the famous town of Jachymov (Joachimstal) to the planned visit of one of the many
mines which made this place world known. There we find out thatwe have some time before the next
tour and were recommended a beautifully located restaurant Berghof to have lunch. The visit to the
mine was extremely educational and interesting with an excellent knowledgeable guide who
familiarized us with the mining from the medieval times tillrecent past. We learned many detailsabout
the mining history, including the discovery of silver and the tragic period when political prisoners were
forced to mine the uranium ore. After leaving the mine, it was time for some of us who had a longer
trip ahead to say good bye, the rest stopped for while in the center of Jachymov, some attended a very
interesting Royal Mint Jachymov Museum as well, had lunch in another recommended Terrace
restaurant in the town of Jachymov and headed back home, too.

What a great weekend it was! 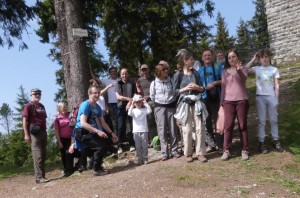